Fire Kissed Book one in the Shadow Kissed series 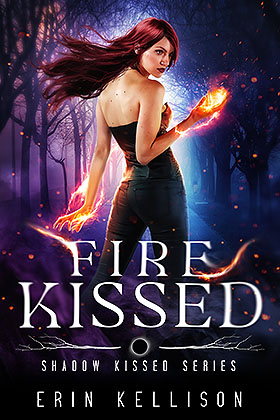 It is Kaye Brand's power to wield. But outcast from her kind, she's been selling herself to the highest bidder - money for her survival in exchange for a magic glimpse into the flames of the future.

One of the angelic Order, Jack Bastian has no use for a female like Kaye, as provocative and unexpected as her blazing beauty. Yet he has no choice but to hire her to uncover the secrets of his sworn enemy and her former fiance, Ferrol Grey.

War is inevitable between the defenders of the Order and the mage Houses who threaten to engulf the world in Shadow. For Jack, mage-born Kaye is off limits, no matter how hot the impossible attraction between them. But in the coming darkness, beset by danger and desire, everything is about to change...

"This is one series that readers should keep an eye on. The characters are compelling, the story builds up very well and the sexual tension is palpable. The joining of angels and mages makes for an unusual relationship in the paranormal romance genre, making Fire Kissed a standout page-turner."
- RT Book Reviews

"Kaye sizzles not just literally but figuratively...a compellingly smart, sexy heroine ready to save herself and the world. Well constructed and consistent, [Fire Kissed] supports plenty of tense action and steamy sex as Kaye falls in love with angel Jack Bastian and tries to regain the power of fallen House Brand."
- Publishers Weekly

"Erin Kellison does such a great job balancing romance and fantasy...I adore Kaye, in all her damaged glory...Nuanced, interesting, and powerful, Kaye takes risks that break the mold of a typical romance heroine (and tests the boundaries of even urban fantasy)."
- All Things Urban Fantasy

"Excellent addition to the Shadowverse. I loved it. Kaye Brand and Jack Bastian make a great team. Kaye is a powerful character, especially with her fire power. But I really loved Jack. He is simply a delicious character. Fire Kissed is a wonderful read."
- Anna's Book Blog

"It didn't take long to find myself deeply drawn into Fire Kissed and mesmerized by the world Erin Kellison created. Ms. Kellison does an amazing job of interlacing romance and fantasy, as usual. I could feel the heat radiating between Kaye and Bastian."
- Simply Ali

"Along with strong characters, Kellison has developed a fantastic world of magic and mystery...Fire Kissed also boasts a truly evil villain, interesting side characters, hot romance and plenty of twists and turns that keep the book moving at a fast pace...a fantastic read with great characters, top-notch world building and a plot that doesn’t quit. Fans of both Urban Fantasy and Paranormal Romance will enjoy it. Now, go read!"
- Wicked Little Pixie

"I thoroughly loved the book and found it hard to put down. Jack Bastian can rescue me anytime. I give this book a solid 4 stars and look forward to more."
- Tigris Eden's Garden of Books

Contrary to myth, angels were not meant to fly. Jack was sure of it, though he had to allow that the commissioned jet was comfortable enough. Soft, white leather seats, a serene view of the limitless sky, a chilled beverage in his hand, and still he preferred the sweet dirt and brambling growth of solid earth. His last tour had been conducted on horseback.

Ms. Brand, however, looked completely at ease hurtling through the atmosphere with nary a care. She wore a dress, if one could call it that, and though the blue cloth fell to her knee, it snugged her figure in a dangerous wraparound that fastened at her waist. He'd seen heeled shoes on the aristocracy of many a time, but Ms. Brand's were ridiculously high, accentuating the curve of her arches. Altogether, she had the polish of a wealthy woman and the reckless simmer of a fire mage.

The mage families would be intrigued.

Imagining Kaye Brand set aflame, he could not fault humankind for once worshipping mages as gods, but he took exception to the mages encouraging such behavior. They were as mortal as any other, though their blood was irredeemably tainted.

And if she did play both sides? Jack had already considered that very likely prospect. The Order would be out its million and the mages would be aware of The Order's intelligence regarding their collaboration with the wraiths. His work would be made more difficult, that's all. As always, he would persevere. There was too much at stake to do otherwise.

"So why Washington, D.C.?" Kaye took a sip from her glass. Whereas he'd asked for lemon water, she'd requested a glass of white wine. In the morning. To accompany a little blue pill.

He knew she had a headache, but this felt like more of a provocation.

He was already irritated, and they had a few more hours in flight.

Good thing he had work to do. He reached for his laptop to review a dossier on wraith capture and holding techniques prepared by the Segue Institute. Long ago, humanity could do little about scourges like wraiths upon the earth. But technology is its own kind of magic, and Adam Thorne of the Segue Institute set the standard where the Otherworld was concerned.

"We have a meeting in the D.C. area to work out the details of your reintroduction to magekind." Jack powered up the laptop and waited for the machine to blink to life. There was more to the meeting than that. Much more.

"As I'm the mage, don't you think you'd better run your plans by me first?" Her voice was a smooth and lazy drawl. She took another sip.

Jack wondered again why The Order was trusting this woman. She needed sobering. If she was going to have any dealings with her fellow mages, she needed to be sharp, smart, or at the very least, lucid. To that end, he said, "I've also arranged an introduction to a pureblood mage. We're trying to recruit him as well."

Instead she looked bored. "There's no such thing as a pureblood."

He selected his file, tapped in his password. Took on her uninterested tone. "Don't you claim one in your Brand family line?"

"Like a thousand years ago." Another sip. Careless. No, reckless.

And her line went much farther back than that.

She would set down her glass; he'd make her. "And it's impossible that another should walk this fair earth?"

The mage once known as Shadowman and now called Khan had finally agreed to the meeting that Jack had proposed weeks ago. Khan was new to the world, and as far as The Order knew, he had no dealings with magekind. He'd consented to this meeting at the request of his son-in-law. There'd been a time when Adam Thorne asked, even begged, favors of The Order. Now The Order turned to him. Curious.

"I suppose it's possible." She rotated the glass between her fingertips, regarding the gold liquid spinning in the cup.

"It's fact," he said. Text filled the screen, accompanied by thumbnail images. If he clicked on one, the image would expand to fill the screen. With such records in place, Jack doubted that wraiths or the fae or even magekind would ever be considered myth and legend again.

"So there's a pureblood," Ms. Brand said with a shrug. And another sip. "What is the essence of her umbra?"

Umbra, an old mage word for the Shadow power they wielded. The fact that they used it like humanity and The Order used the word soul had always bothered him.

"His umbra," Jack corrected. She'd set down her glass if he had to take it from her.

"His, then." She was irritated now. Not good enough. He wanted her serious.

Jack gave her his full attention for impact. "Life and death."

"Before his transformation from fae to mortal, he was commonly known to the Western world as the Grim Reaper." That ought to do it.

"You're going to introduce me to the Grim Reaper?"

"Yes." Jack smiled. He was having a little fun now. Who would have thought?

And then he sobered. Ms. Brand did indeed set down her glass, but not before quaffing its contents first.