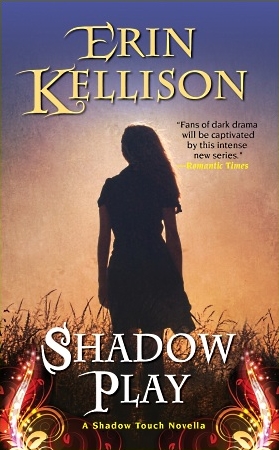 The world is growing dark with it as mysteries from antiquity and legend creep into our time, bringing a new world of danger, beauty and...

Dr. Cam Kalamos has dedicated his life to studying its strange properties, but nothing is more intriguing than a woman whose soul is split in half, one part under her control, one part bent on...

How can he resist the lure of a lover with no inhibitions and an insatiable desire to possess him? Both Ellie and her shadow want Cam, but there is an innocent child to be rescued from the forest and the strange fae creatures of...

Love, loyalty, betrayal - which will rule? As Ellie sends her other self into the darkness, there is only one certainty: Trusting in shadows is a dangerous game.

At Segue, Cam had been drilled black and blue many times. Balance. Shoulders and head above hips. Keep your guard—one hand up, one down. Never stop moving. Create openings by striking high and then low. Get behind your opponent to gain the advantage and control.

Heh. But what if you couldn't actually see your opponent?

Heart booming, he struck into the warp of air.

Connected with someone's chin. Felt the impact in a burn, wrist to elbow.

The intruder fell out of his cover onto the floor. He rolled in a whirl of smoky Shadow, and right back into invisibility. A black-bladed knife was left behind. And the prone body of the real doctor appeared, glassy-eyed, mouth slack, a pool of blood around her. The metallic smell grew stronger, pungent.

Ellie. Cam wheeled to stand in front of her. As he did so, he brushed something not visible to the naked eye. He struck again at nothing, but a black starburst blanked his mind, and a warm flow of blood rushed from his nose. Keep moving. Get off the line. He headed into the pain with a reach, grabbed the intruder by the neck. Flipped him on his back.

For the first time, he got a good look at him. Black eyes, short brown hair, beard growing in. And then the intruder slid again into nothing before his eyes. The knife was gone.

A rush of air—Cam dodged a strike, and brought his elbow up. Connected. Heard a woof of pain. A gasp.

Cam eyed the room, huffing for air, nose still dripping blood. But yeah, he could take this guy.

And then his head was yanked back by the hair, an edge pressed against his throat. He racked his mind for a way out of this one. He could feel the prickle of parting skin.

"Let her go," the intruder growled to Ellie.

He wanted the fae. Whether the fae was willing, Cam couldn't tell. But Ellie would know not to bargain. If the intruder were willing to kill one, or two, he'd be willing to kill more. And if the fae would support those efforts, then under no circumstances, including the knife at his own throat, should the fae-in-doctor-form be released.

"You want her?" Ellie asked, a corner of her mouth tugging up. Mean. Sly. Shadowy.